HIS EXCELLENCY MR. JANABAZAR TUVDENDORJ PRESENTS HIS LETTERS OF CREDENCE TO THE PRESIDENT OF ESTONIA

On 29 October 2020, H.E.Mr.Janabazar Tuvdendorj, Ambassador Extraordinary and Plenipotentiary of Mongolia to the Republic of Estonia presented his Letters of Credence to Her Excellency Mrs.Kersti Kaljulaid, President of Estonia, Ambassador resides in Stockholm.

During the presentation of his credentials, Ambassador Janabazar Tuvdendorj conveyed Mongolian President Kh. Battulga’s warm regards to President Kersti Kaljulaid and reaffirmed the invitation from the President Kh.Battulga to pay a visit to Mongolia at her convenience. Talks were mostly focused on celebrating the 30th anniversary of Diplomatic relations between the two countries in 2021. Both sides noted that celebration of the 30 years anniversary of the diplomatic relations between Mongolia and Estonia should be centered on promoting the bilateral cooperation based on shared interests and comparative advantages of two countries.

During his time in Tallinn, the Ambassador met with Mr. Kaido Höövelsen, Chairman of the Estonian-Mongolian Parliamentary Group and its members, Mrs.Celia Kuningas, Director of Asia and Pacific Region and Mrs.Aari Lemmik, General Director of the Communication Department of the Ministry of Foreign Affairs of Mongolia to exchange views on further strengthening cooperation between the Parliaments, restituting political dialogue mechanisms between the two countries as well as intensifying Mongolia-Estonia cooperation in various fields including tourism, education and culture.

Furthermore, Ambassador T.Janabazar held a meeting with the Director of Estonian “E-Governance Academy” to discuss future cooperation opportunities on developing a digital society and cybersecurity, organizing joint activities on E-Governance, exploring possibilities of scholarship quotas for Mongolian students. The same day, Ambassador met with the Director of “Estonia Enterprise” agency in charge of developing trade, investment and tourism cooperation with foreign countries. Two sides exchanged views on developing trade and economic relations between Mongolia and Estonia. During the meeting Ambassador affirmed Mongolian participation in the “Asia Update” international conference to be held next year in Tallinn. 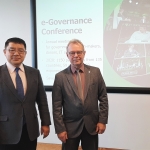